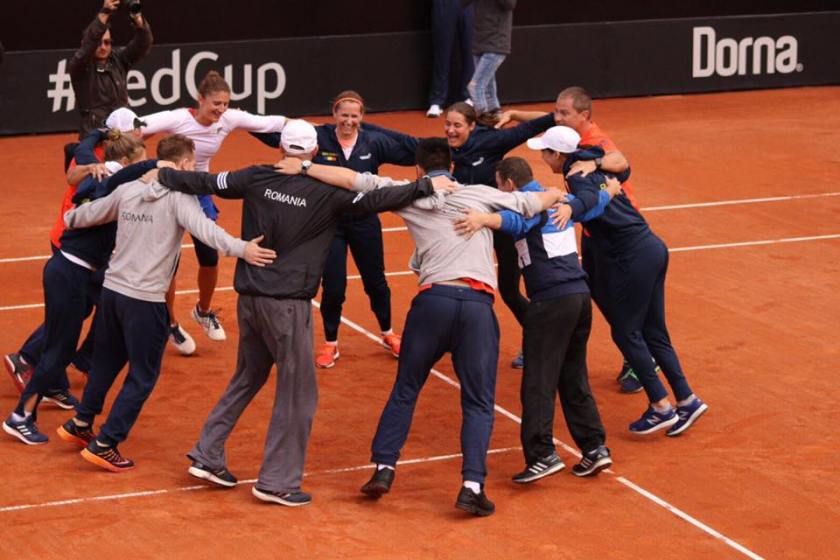 Simona Halep and Irina-Camelia Begu put a controversial opening day in Constanta behind them and clinched victory against Great Britain on Sunday with two straight-sets wins respectively against Johanna Konta and Heather Watson.

With the win, Romania maintained its position among the Fed Cup by BNP Paribas elite next season while Britain will return to challenge again in Europe/Africa Zone I.

What form next year’s competition will take has yet to be decided but it will continue to include the best 16 nations in the world.

After the win, the Romanians celebrated by dancing and embracing on court as Begu completed a narrow victory over Watson 64 75 in a match lasting two minutes over two hours, and a second set, in which almost every game went to deuce and which lasted an hour and 18 minutes.

The tall, hard-serving Begu beat Watson in their only previous encounter in straight sets on hard courts in the first round at Indian Wells in 2013 but clay, which was clearly Romania’s preferred surface gave the hosts an added advantage.

On Sunday, not only the score, but the stats too, showed a very evenly balanced contest between both No. 2 players, except for Begu’s ability to drill backhand winners past Watson in what was a well-fought baseline duel.

“There was a lot of pressure, I didn’t play my best tennis but it didn’t matter in the end, I just wanted to win and show the people that we are really strong,” a beaming Begu said, adding that Watson was a tough opponent for her.

“She’s a really difficult player and it’s always tough to play against her and I expected a difficult match, but I just wanted to win,” the Romanian hero of the hour said.

Watson said she did not play her best tennis and blamed her errors for her defeat.

“I feel I could have done a lot better things better today and I made a lot more mistakes than I usually make,” she said.

A fired-up Halep bossed her match against Konta on her favoured surface and won 61 63 in an hour and 11 minutes. It was decidedly one-sided between two players ranked fifth and seventh in the world respectively. Konta failed to find any consistency and committed a high number of unforced errors with many shots failing to clear the net.

Halep broke her Konta three times in the first set but it was followed by a lapse in concentration for the Romanian at the start of the second set and suddenly the contest appeared far more even. Konta broke Halep early for a 3-1 lead, as the Romanian herself appeared to lose momentum and netted many of her shots in the contest that had more of a hard court character about it, as it lacked many long rallies.

But needing to regain momentum, Halep suddenly kicked back and upped her game as she made Konta fight hard for every point. It was just a bit too much for the British No. 1, as Halep edged her way back point by point and game by game to close out the win by taking the next five games.

“I expected [the match] on clay to be like that,” admitted Halep of her dominant display. “Today I did everything [right]. I was very focused. I was really motivated after yesterday, and I’m really motivated to win this tie,” Halep said after her victory.

“I feel that we are dominating now,” she said, adding that the hosts are ready to move on from the events of the day before. “It was what it was. I’m not thinking any more about yesterday now.

“The public was very fair yesterday as well. Today they were very loud and I will join them for the second match,” Halep said.

Konta said she wanted to put Saturday’s ordeal behind her and move on with playing tennis.

“Yesterday obviously had an effect on me but today it has to be about the tennis. I gave my best today with what I had but Simona was better than me today,” she said.

The forecast rain held off for the tie and the dead doubles to conclude the tie was won by Laura Robson and Jocelyn Rae who defeated Halep and Monica Niculescu 63 16 10-8.